Hard work is the key to success After fleeing religious persecution and military conscription, Sung and Kap embarked on a harrowing journey to the United States from Myanmar in 2011. Through World Relief’s refugee resettlement program, they were placed in DuPage County. Growing up in Myanmar, Sung was fortunate to experience a formal education, which included learning some foundational English. Kap, however, left school early to work and help his family, and he was not exposed to English before coming to America. Sung’s native langue is Burmese, which is the national language of Myanmar and Kap’s native language is Chin, which is another language represented in that country.
Sung and Kap have four children, ranging in age from 3½ to 11 years old. When their school-aged children began school in DuPage County, the school district identified the children as being at risk and provided a home-based parenting program that increased the family’s self-sufficiency and stability. The program identified Sung’s low-level English skills and referred her to Literacy DuPage.
In 2016, Sung was matched with tutor Carol. As Sung started to see progress, she encouraged Kap to request a tutor through Literacy DuPage. In 2017, Kap began working with his first tutor. Unfortunately, the tutor stopped working with him due to her family responsibilities. After a short wait, Kap was re-matched with tutor John.
Tutor Carol joined Literacy DuPage in 2011 after a career in banking. Upon retirement, she wanted a meaningful volunteer experience and discovered Literacy DuPage through her research of volunteer opportunities. Literacy DuPage stood out as an organization that would be a good fit for her. John joined Literacy DuPage in April 2021 after retiring as the Executive Director of the nonprofit Bridge Communities. 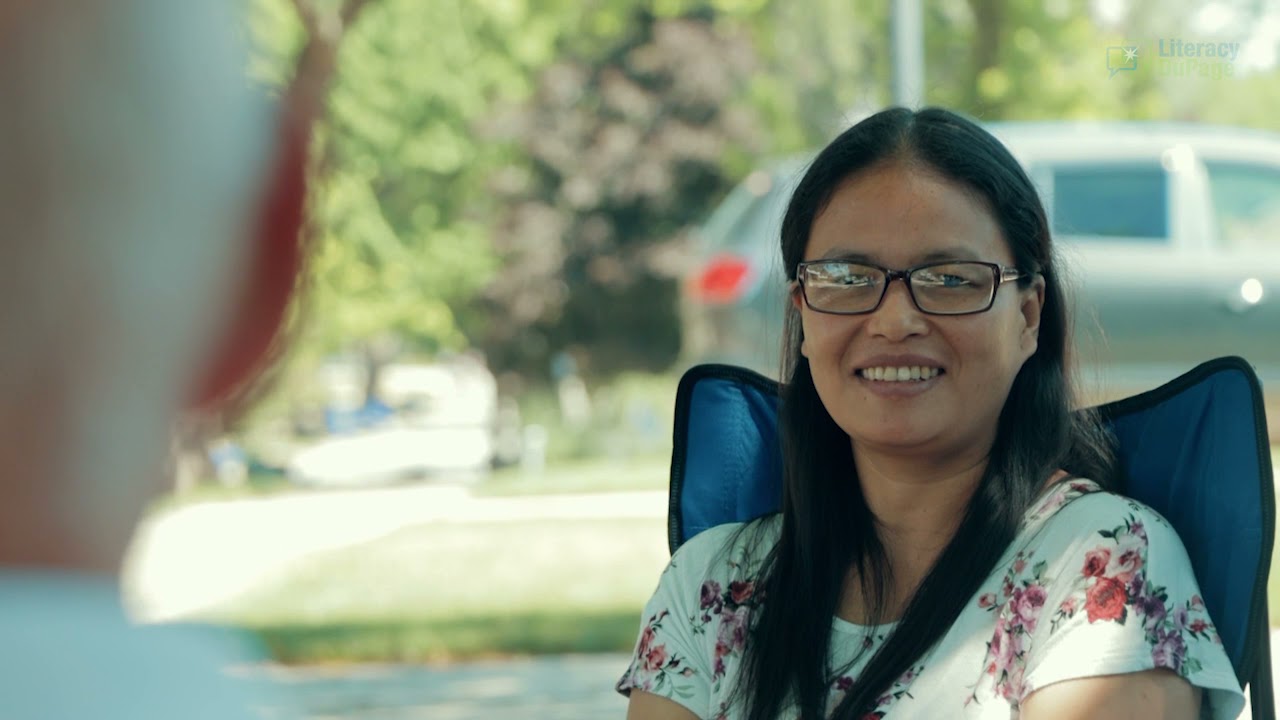 Like many tutor-learner pairs, Sung and Carol took a brief hiatus when the COVID-19 pandemic began. Still, they kept in touch via phone and text. They then started using Zoom and continue with that format today.
Kap works in the manufacturing sector and uses English with his supervisor at work, but his co-workers primarily speak Spanish, which he does not know. Sung and Kap do not speak English at home because they want to preserve their home languages for their children, who are fluent in English and Chin. This limits opportunities for Kap to practice English. Carol and John have collaborated to identify tutoring strategies and activities to help Sung and Kap practice their English skills together. This targeted practice supports Kap’s progress and continues to build Sung’s skills. Carol and John are invested in the success of their two students and their family.

One of Sung’s tutoring goals was to become a U.S. citizen. Carol and Sung spent almost a year working toward this goal, and both describe this preparation as a marvelous experience. For Carol, this provided further insight into Sung’s intelligence and determination through Sung’s ability to retain information and understand the history and United States government. Sung naturalized in 2018. In addition to this achievement, Sung and Kap have had other successes that stem from their dedication to learning English. Kap, an incredibly hard worker, always takes overtime when available, enabling Sung to stay home with their four children. Through Kap’s tirelessness and Sung’s ability to communicate, they purchased a home in 2017!
Sung has benefitted from Literacy DuPage’s accessible tutoring model, alleviating the challenges of attending ESL classes while caring for her children. Literacy DuPage’s flexibility has allowed her to learn English with her tutor in a non-threatening, relaxed environment at times that are convenient for her.  With Carol’s help, Sung has moved from a beginning- to intermediate-level English language proficiency. Carol and Sung have also focused on Sung’s interactions in the community, including communicating with schools and doctors and checking out books from the library. Sung’s next goal is to prepare to earn her GED.
While Kap’s progress has not been as robust as Sung’s, his confidence has grown through tutoring. With increased listening skills and a richer vocabulary, he has improved his ability for conversation and is more comfortable speaking English. Kap’s immediate goal is to complete the naturalization process and become a U.S. citizen.
John is dedicated to helping Kap achieve this goal. Although they only recently started working together, they have already made headway and have had fun learning. As an example, one of the pair’s first activities was to pick a book from John’s now-grown children’s book collection. They chose the Cat in the Hat by Dr. Seuss. In reading this book together, Kap discovered new words and learned about idioms and rhyming. Through practice together, Kap has confidently read the story to his youngest child more than once.

Over these ten years, Carol’s tutoring experience has exposed her to how challenging life in America can be for immigrants. Carol has seen Kap’s motivation to learn, but also the difficulty in learning a new language with little formal education and time to practice consistently. Carol takes pride in supporting Sung and Kap’s integration into their community and developing a foundation to reach their goals.
John enjoys the flexibility of the Literacy DuPage program and the ability to tutor without the requirement of following a formula. This approach allows John and Kap to find varied ways to learn and work together and keep their tutoring sessions flowing and evolving as Kap’s language develops.
Category: Learner-Tutor StoriesBy Bobbi BurgstoneSeptember 19, 2021
Tags: AchievementsRefugeeTutoring Story
Share this post
Share on FacebookShare on Facebook TweetShare on Twitter Share on LinkedInShare on LinkedIn

A love for teaching
February 17, 2021
Let’s stay connected!
Find and follow us on social media, and subscribe to our email updates: